The 10th edition of 12 Points kicked off in San Sebastian last night. This year, the nomadic festival (that alternates between Dublin and different European locations) is being delivered in partnership with San Sebastian’s own Heineken Jazzaldia Festival, meaning that two jazz festivals are being presented simultaneously. Whilst this might seem strange at first, you soon realise that there is a genuine complementarity between the programmes of the two festivals; Jazzaldia features a number of leading American and European artists, from Diana Krall to Jan Garbarek, whereas 12 Points celebrates emerging talent and the diversity of improvised music from 12 different European locations.

There was clearly an appetite for the new among San Sebastian audiences last night, as people were queuing around the block waiting for the doors to open prior to the event.

The Victoria Eugenia Theatre provided a stunning backdrop to the event, as music from Denmark (The Embla), Spain (Marco Mezquida) and Germany (The Eva Klesse Quartett) enhanced, blended with, and confronted the space at times. Sound has a transformative potential both inside and outside the concert hall, and 12 Points encourages us to engage with a sense of place, to think about the similarities and differences between people and cultures through music, and to consider the importance of improvisation in art and everyday life. 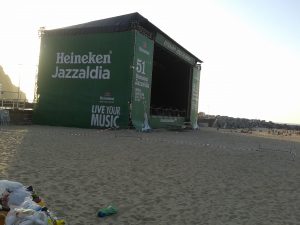 In San Sebastian there are several jazz bars and clubs as well as restaurants that feature live jazz. In addition to the large Jazzaldia stage on the beach, you can also encounter street musicians playing jazz and view a number of colourful posters that advertise both festival events and local jazz gigs. 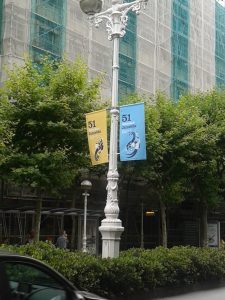 Being here, you are continually reminded of the importance of improvised music and its ability to transform our environment; jazz clearly supports cultural tourism and provides the perfect soundtrack to the city with its beautiful beaches, historic buildings, fabulous cuisine and nightlife.

But the music also has a lot to say about San Sebastian’s place in the world and the city’s aspirations as the 2016 European Capital of Culture.

There is something special about San Sebastian’s place in the Bay of Biscay, not only with its distinctively Basque character but also with its proximity to France. 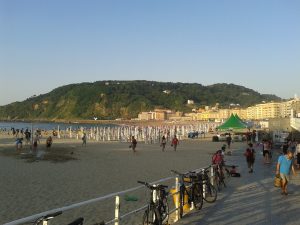 Just being here makes you think about different identities, the politics and the connectedness of people in Europe past and present, and the way in which culture clearly flows in multiple directions; like 12 Points, it cannot be reduced to simple boundaries and border controls.