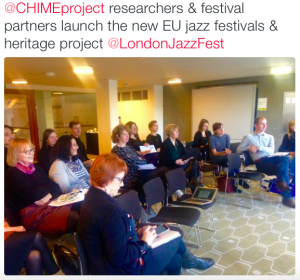 A group of international scholars and festival organisers and music producers gathered at the Royal Festival Hall in London during the EFG London Jazz Festival to launch the project. I took some notes, both for the record and to help us shape 2016 meeting agendas and work.

Project leader Prof Tony Whyton (Birmingham City University) introduced the day, reminding us of the project’s key questions around heritage sites, jazz festivals—ranging from jazz as a heritage music from itself today to urban regeneration to difficult questions of the intangible impact of festivals on festival-goers.

Prof Helene Brembeck and Merja Liimatainen (University of Gothenburg) talked of the place of consumption at festival as a core experience for festival-goers, in particular in the context of the presentation and consumption of heritage, memory, the past, at jazz festivals. How does music re-sound the architecture of the city at festival? The Swedish team will be looking at contrasting jazz festivals in Gothenburg, Gamlestaden Festival and the Classic Jazz Festival, a process of embedded research within the organisations and ethnography and cultural history, critical interrogation of festival imagery, publicity and events and venues.

Ros Rigby (Sage Gateshead/EJN) discussed the work of Europe Jazz Network, a project associate partner. EJN has over 100 members, and is interested in how we can collaborate further together. One EJN project, Take the Green Train, is facilitated by Julie’s Bicycle.

Katarina Hultin and Marie Tarrach Bävholm (Kultur i Väst), representing the 80-strong team of cultural administration of the region of west Sweden, showed us some of their work, including as organisers of the Women in Jazz Sweden Festival 2015, which included researchers and performers, seminars and concerts. More widely, Kultur i Väst is a multi-arts organisation including libraries and literature, film, dance, visual art, as well as different musics. Culture and health, culture and sustainability of society.

Eric Arellano and Sigrid Bersmann from Gamlestaden Jazz Festival talked of the establishment and development of their festival in Gothenburg, which included originally a historic site in Eastern Gothenburg. Recently they have expanded into the city centre by inviting the local jazz clubs to be involved, and for 2016 plans are to also move to unconventional and unexpected jazz venues.

Dr Beth Perry (University of Salford) discussed Mistra Urban Futures, the international sustainability agency which also sponsored the inception day event. Mistra works on how to make what it terms ‘Just cities’—which are fair, green, accessible. How can cities and their cultural organisations produce cultural sustainability, how are heritage sites being re-used in cities, how are meanwhile areas made use of, eg at festivals? These are some of the questions of both Mistra and CHIME.

In a session called ‘How will CHIME chime? Identifying, sharing, and beginning to map our impact’ Prof George McKay (University of East Anglia) introduced the question of impact. Each of the academic researchers had been asked to speak briefly about up to three existing or planned impact activities/outputs/achievements, and we went round hearing about those in turn. We plan to make this initial impact map available as an infographic on the website, and also to revisit it later in the project, to add further to the impact map as we develop our work and collaborations. Watch this space.

Beth and Jess Symons (also Salford) then moved us into a workshop exploring the idea of ‘culture as the fourth pillar of sustainable development’, and to get us thinking about how CHIME might be able to address or contribute to national and international policy questions. In small groups we all made ‘ideas flowers’ around three or four themes that had come up during the course of the day: equality and diversity, sustainability and place, connecting to audiences. Here we included contributions from Amy Pearce of EFG London Jazz Festival, Emily Jones of Cheltenham Jazz Festival and Dr Emma Webster, UEA research associate on the related Impact of Festivals AHRC project. We aim to make this material available in due course (soon), and it will help shape our collaborations across the duration of the project. Again, watch this space.

The day was summarised by Tony and then closing remarks from Prof Tim Wall, Associate Dean (Research) at the project’s lead institution, Birmingham City University, who spoke to us of the importance of projects like CHIME at an institutional level, too. We then headed over to the Barbican to attend a reception and evening concert to which we were kindly invited by EFG London Jazz Festival.

A very productive and energising day, introducing, meeting each other again, hearing detail, workshopping, planning future activities. Intriguing questions raised during the day that we might return to included: